WWF funded study: We have five years to switch to a global clean-energy industrial economy or it’s too late 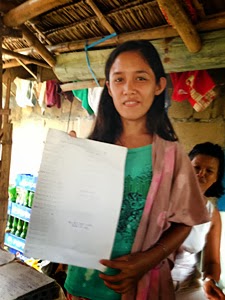 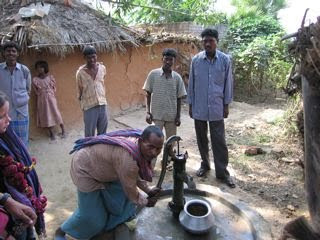 The world has just five years to change to a low-carbon industrial economy before climate change goes past the point of no return according to scientists at Climate Risk, an environmental research firm known for its work for global insurance companies. The World Wildlife Fund (WWF) sponsored their study, titled Climate Solutions 2 that was published yesterday. It is the first modeling analysis that puts a timetable on reducing carbon emissions that answers the question: “How long will it take [for] clean-tech industries to deliver a low-carbon economy (Climate Risk 2009)?” The above photo is of local farmers showing us yet another dry we  ll near Bodhgaya in Bihar, India. Photo by Angela Rockett Kirwin, KIRF

The scientists discovered that by 2014, projected industrial growth rates would make it impossible for countries to meet the carbon targets required to keep global warming below 2°C. The report also stated  that market measures such as the European Emissions Trading Scheme (ETS) of carbon credits would not be enough to stop global warming on its own (WWF 2009). Market measures need to be combined with other policies such as “energy efficiency standards, feed-in tariffs for renewable energy and an end to ‘perverse’ subsidies for fossil fuel use according to the WWF website (WWF 2009)”

“Climate Solutions 2″ tells us that we need to start making the change to a low-carbon economy today,” said Kim Carstensen, who leads WWF’s Global Climate Initiative that sponsored the study. “The transformation will require sustained growth in clean and efficient industry in excess of 20 percent a year over a period of decades.” 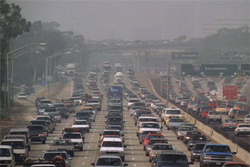 Developed countries, known as Annex 1 countries during the United Nations Climate Change Talks, such as the United States, Australia, and Japan, are responsible for most of the global warming. However, Annex 1 countries have stalled in their commitments to reducing global warming. They committed to decreasing their emissions by only 11-18% by 2020 during the recent Climate Change Talks in Bangkok according to Alliance of Small Island States (AOSIS) (Bevington 2009). Least Developed States (LDCs) and AOSIS members have the most to lose if there is runaway global warming. LDCs have sizable rural populations who rely on the weather for their agricultural subsistence. For example, in India alone, an estimated 450 million people live off of rain-fed agriculture (Economist Magazine 2009). The AOSIS nations will be under water as the sea levels rise due to global warming. At the current level of global warming of 0.8°C, the AOSIS island nations are already suffering from “coastal erosion, flooding, coral bleaching and more frequent and intense extreme weather events” according to their web site (AOSIS 2009). Photo above was found via Google Images from Progressivestates.org.

On a positive note, “Climate Solutions 2″ study predicts that renewable energies such as wind and solar power will become price competitive with fossil fuels between 2013 and 2025. This conservatively assumes no more than a 2% annual rise in fossil fuel prices (WWF 2009). “This analysis shows that we can win the fight against runaway climate change … by creating stable long-term investment environments that don’t seek immediate returns,” said Dr Stephan Singer of the World Wildlife Fund (WWF 2009).

The international agreement at COP15 this December will determine how its signatory nations will manage the “low-carbon industrial revolution” that is necessary to prevent catastrophic climate change. COP15 will be the successor agreement to the Kyoto Protocol signed in 1993. Hopefully the COP15 negotiators will come to an accord that will prevent runaway global warming in the next five years (COP15 2009).

2009 “After Bangkok: the Roadblocks to Barcelona and Beyond,” Adopt-a-Negotiator for Climate Change, retrieved on October 19, 2009, from: http://adoptanegotiator.org/2009/10/16/after-bangkok-the-roadblocks-on-the-way-to-barcelona-and-beyond/