Mark Kirwin and his brother Stephen traveled to Phnom Penh, Cambodia after doing tsunami relief in Thailand in May 2005. This was the most efficient way to help out in Cambodia, considereing the airfare from the US, with Mark already in Southeast Asia doing tsunami relief.

In Phnom Penh, the Kirwin brothers saw endemic poverty, homeless people encamped in the city parks at night and a lot of orphanages. Being leary of the multitude of real and not-so-real non-profits in Cambodia subsisting on the “NGO economy,” the brothers decided to personally evaluate local needs at the orphanage facilities, help out with only in-kind donations, and make the deliveries themselves. It was not hard to find familes in need and poverty among the wide boulevards and parks of the French colonial capital city of Cambodia.

Mark ended up purchasing and delivering building supplies and food staples for a home for street children outside of Phenom Phen that was recommended as one of the several legitimate homes for orphans by his local Khmer contact, an altruistic café owner in Phnom Penh who has donated food to needy families in her neighborhood. With the assistance of her and her informal aid network of locals, KIRF purchased needed building supplies and food staples and delivered them to the orphanage. The lumber was delivered using a local motor bike taxi. Mark’s brother stayed behind in Phnom Penh after he left and verified that KIRF’s donations were used to improve the orphanage as they were intended.

In addition to helping out the orphanage, the Kirwin brothers, with assistance of their altruistic café owner and several local volunteer humanitarians, distributed food packages to homeless families one evening at a central park in Phnom Penh. Before leaving Cambodia, the brothers also braved the very real un-exploded land mine hazards of running the trails in the countryside around Phnom Penh. The countryside is beautiful verdant land that is still littered with deadly un-exploded land mines. Many families still suffer from the legacy of the Pol Pot regime’s war of terror many years ago. 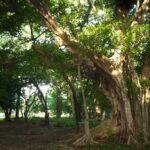 Stephen Kirwin and Cambodian friends Mark Kirwin, and his brother Stephen traveled to Phnom Penh, Cambodia after doing tsunami relief in Thailand in May 2005.