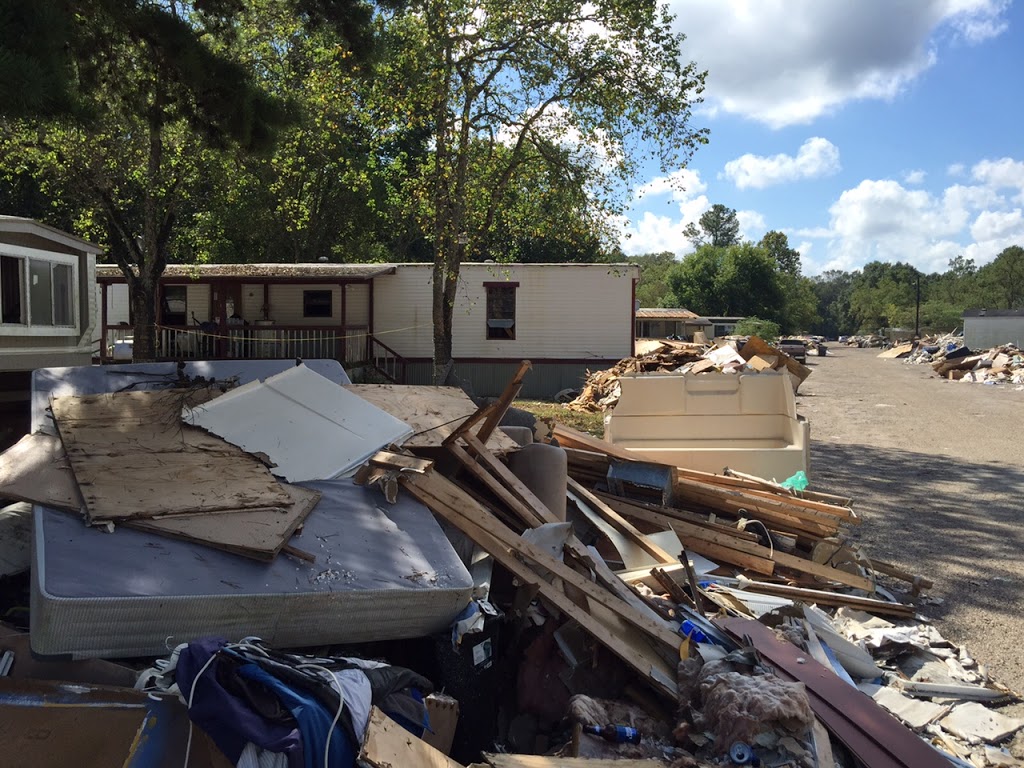 Louisiana Relief 2016
As we were driving down roads stacked high on each side with ripped out drywall, furniture and moldy house hold goods, an elderly gentleman told us that the flood waters covered more area than the state of Delaware.
It is hard to believe the magnitude of the flood that hit Baton Rouge Louisiana in August of 2016. It has been estimated that the damage caused by the flood was the worst in US History since Hurricane Sandy. We saw the results of what overflowing rivers and record rainfall did to the communities of the parishes such as Denham Springs along the Comite River.
The locals told fellow Rotarian and KIRF volunteer Steve Doll and I that if it were not for the “Cajun Navy” many more people would have lost their lives during the flood. The Cajun Navy was a group of local fisherman who used their boats to rescue people from rooftops during the worst of the downpour and flooding that put much of the town under water and ruined thousands of homes and businesses. It was news of the Cajun Navy that originally inspired me to plan this KIRF relief trip in partnership with the Ventura Downtown Rotary, Ventura Rotary East, and Ventura Downtown Lions Club. The financial partnership of these organizations made this relief trip a huge success.
We were fortunate to be able to accomplish a large part of the need assessment with the tireless help of a team of local volunteers: fellow Rotarian Mike H. from Baton Rouge Sunrise Rotary, Charlene M. from the Greater Baton Rouge Food Bank, Samuel S. from the Mid-City Development Alliance, Lisa H. from the Society of St. Vincent de Paul, and Charles D. from the Church of Immaculate Conception. Once we were on the ground in Baton Rouge, Steve and I could not have accomplished so much so quickly without the amazing stamina and guidance of Laura D. from the Sunrise Rotary and Charles D. Father Thomas Clark was of great assistance in locating elderly people who needed assistance; as well as Barry Meyer, from The Arc of Baton Rouge. He organized his team to help us shop for and deliver requested supplies.I would also like to thank Sam, Angie and Laura for putting us up in their houses during our time in Baton Rouge.
We were on the ground for three days. Our first day started with a Rotary meeting at Sunrise Rotary (friendly bunch if you ever get the chance to have breakfast with them!). Then we were off driving the communities around North Baton Rouge with Charles to observe the damage and discuss the present needs of the people affected by the flood.
Later that day we met with Barry at The Arc and went over lists of what The Arc’s clients and employees with flood damaged homes needed. Basically, many lost everything but the clothes on their backs.
After a long day of need assessments, we found out what was needed. So day two was spent in Walmart and Costco purchasing the requested products. A special thanks to Walmart manager Fred and his awesome staff for helping us purchase need items for 96 Arc clients and employees. We purchased cooking and eating supplies, plates, towels, sheets, cleaning and bathroom supplies, and gift cards so folks could purchase clothing.
We were able to purchase 6,000 cans of nutritious tuna and chicken breast meat for the Food Bank. The Food Bank lost all of its food and most vehicles as a result of the flood waters.
We worked most of the day with volunteers loading up cans of chicken from Costco. Tuna was purchased at discount through the kindness of Associated Grocers.
The Food Bank is supplying much needed food for those stricken by the flood.  We purchased a pallet of cases of food for families with children and elderly people who lost their homes and are food insecure. 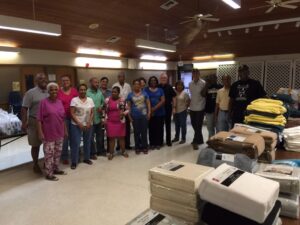 Our work ended the following day when Father Clark and his congregation delivered supplies to 30 elderly couples whose homes and contents were badly damaged by the flood waters.”) 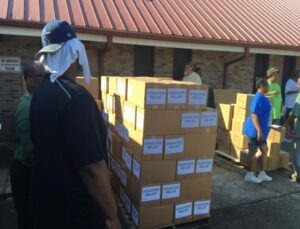 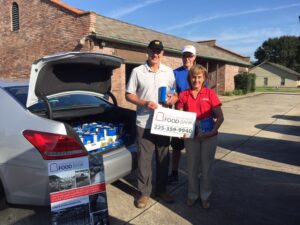 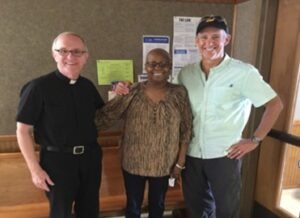 Thank you to all who helped with this relief trip to Baton Rouge!
Mark Kirwin, Esq.
President and Co-Founder KIRF