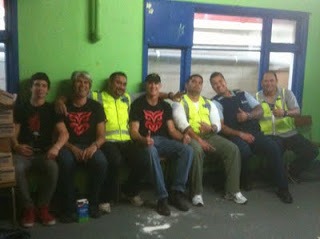 On February 22nd this year a 6.2 magnitude earthquake hit Christchurch, New Zealand.  The earthquake destroyed or rendered un-inhabitable most of the downtown commercial district in Christchurch and the neighboring harbor city of Lyttelton (where it toppled the once famous Volcano Café).

Our first day of assessment showed us the immense devastation the earthquake had caused to the city.  Block after block of the commercial and community center of Christchurch was destroyed.  This area was the heart of Christchurch supporting much of its business and tourist attractions.  Business owners and residents had still not been allowed back into their shops and homes since the earthquake to retrieve good and personal items due to the danger of further building collapse.  In fact, we felt three aftershocks during our relief work efforts!
We saw house after house and business after business with major structural damage and a red “UNSAFE” Earthquake Inspection sign. The red signs indicated that the buildings were not only un-inhabitable but residents and business owners were not allowed to enter them for any reason.
During the first few days of assessment we interviewed business owners and residents regarding how they were coping with the effects of the quake.  Many businesses had been forced to shut down and residents were living with friends or relatives. The government had installed port –a- potties along the streets and large tanks of water.  The sewer and water lines had broken throughout the earthquake zone causing the drinking water to be contaminated.  Much of the sewer run-off was, by unfortunate necessity, directed to open water such as the ocean and the various creeks throughout the city.
We were advised by the government earthquake relief center in Lyttelton (RAC Center) that the eastern suburbs needed the most help.  We were told that many people in poverty lived in these areas.  We were also told that we were the first Americans (Kai and I) who had come to the center to offer aid.  Through our contacts we were able to set up a meeting at The Pacific Hub, which provides community services for the Maori and other Pacific Islanders in and around the eastern suburbs of Aranui and Wainoni.  The Pacific Hub is a small organization supported by New Zealand’s Ministry of Pacific Island Affairs.

Through meetings with the kind folks at The Pacific Hub we found out that the last food aid available to the Pacific Islander families, donations from the Salvation Army, had just ceased. Even though these families would be without adequate food, there was no more non-profit-provided aid expected for them.  As you can well imagine, the local government is overwhelmed with the assistance effort, trying to repair the sewer /water lines and provide temporary housing for the displaced as well as rebuild the commercial zones.

We learned that many Pacific Islanders in the area had lost their homes and were living in cramped quarters with other families; one home had 29 people in it.  Respiratory infections were becoming a health concern because so many people were sleeping on damp floors caused by the liquefaction mud and water that came up through the surface of the ground right after the quake.  Many people had lost their jobs and had no income because of the quake damage to the commercial sector.
We found out these residents needed food, blankets, wind up torches (flash lights), water, generators, raised beds and other basic needs.  So, off we went to find out how KIRF could help with some of these items.
Through the generous support of several New Zealand businesses, such as the Wainoni Pak N’Save (where we purchased food), clothing manufacturer MOKO (who supported the travel and hotel costs for this trip as well as donated supplies) and MOKO’s suppliers: Texco International (where we purchased discounted blankets) and Headwear Specialists (where we purchased beanies at a significant discount). We were able to provide the needed and requested food supplies, blankets, socks, and beanies for 100 impoverished Pacific Islander families who had been severely affected by the earthquake.
After purchasing the food items and other relief supplies, we worked with police officers, who had been transferred from Auckland to help with the recovery effort. Together with them, a local police officer and more people from The Pacific Hub, we were able to create care packages for each of the families.  All of these people provided a tremendous help to us and were very kind and generous in their own time and efforts to help out the local community.
As special thank you goes out to MOKO who provided the relief volunteers with some cool t-shirts and a generous sponsorship for this relief trip. We thank our anonymous donor from Canada, and others from the US, who all made this relief trip possible.
Thank you.
Mark
Director and President
Kirwin International Relief Foundation, KIRFaid.org