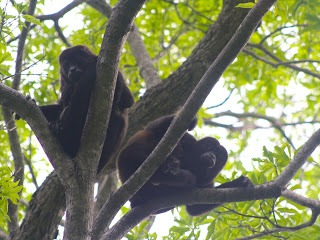 As a sustainability response to climate change and global warming, one strategy that you don’t hear about a lot is farming using heritage seeds. Heritage food plants are plants native to an area and that propagate naturally (as apposed to sterile hybrid seeds sold by many seed companies). From a humanitarian point of view, they are culturally and biologically native to arid drought-afflicted areas, are nutritious and are more likely to be adopted (or re-adopted) by rural communities as a food source. As a native food they can be considered a validation of an indigenous person’s identity and traditional culture as well as a practical and drought-resistant agricultural product. The photo above is of Angela Kirwin, KIRF Co-Founder, at a soil remediation project in Arusha, Tanzania. Local farmers are trying to re-claim farm land ruined by soil erosion by planting indigenous trees and food plant varieties.

The effects of global warming have caused widespread droughts, malnutrition and starvation. An estimated 25,000 people (adults and children) die every day from hunger and related causes according to the United Nations Food Programme (2009).

As radio journalist Sam Eaton reported in his segment titled “Sowing seeds that will take the heat” from the “Sustainability Desk” for Marketplace on National Public Radio, “…as warming climate threatens mainstream agriculture, these unique genes in these little known seeds could turn out to be crucial for feeding the planet. (Eaton 2009).”

Unfortunately, heritage or non-hybrid seeds are becoming rare: in 1981 there were an e

estimated 5,000 non-hybrid or heritage seed varieties, by 1998 the number has gone down to about 600 according to environmental activist Barbara Kingsolver, co-author of the book Animal, Vegetable, Miracle (Kingsolver 2007:52). This is compared to an estimated 80,000 plant species that have been eaten in human history according to Indian crop ecologist and heritage food conservationist Vandana Shiva (Kingsolver 2007:49).

Today, due to industrial monoculture farming, three-quarters of all human food comes from just eight species. And, of those eight species, most come from only three plants: “genetically modified corn, soy, and canola” according to Kingsolver (Kingsolver 2007:49). Furthermore, 98 percent of seed sales worldwide are handled by only six very huge and very politically influential companies: Monsanto, Syngenta, Mitsubishi and Dow (Kingsolver 2007:50). These food plants have been bread for profitable traits such as increased shelf life, uniformity of fruit size and not survival traits such as drought resistance. What is worse, the plants are sterile so (1) they can’t adapt to changes in climate naturally and evolve more successful strains and (2) the plants are a burden to economically disadvantaged communities who depend on these seeds for food and must buy a new batch of them each growing season.

Ethnobiologist Gary Paul Nabhan is one of many scientists, botanists, and backyard gardeners who are committed to saving indigenous plant food varieties by collecting and sharing their heritage seeds. They do this for many reasons: in response to global climate change, to preserve native traditions and foods, for more nutritious plant food varieties, and for potential pharmaceutical discoveries. From a business point of view, heritage seeds answer the market’s current demand for tasty and exotic heirloom/heritage varieties of plant and animal foods.

Nabhan has been writing about the correlation between chronic diseases such as heart disease, obesity, diabetes and the con

sumption of non-traditional processed and fast foods by Native Americans in the Southwest for over thirty years (Nahban 2004: backcover). He published some of his findings about the correlations between health, adaptation and diet in the book Some Like It Hot: Food, Genes, and Cultural Diversity . As Nabhan explains, “…each ethnic cuisine reflects the evolutionary history of a particular human population as it responded to the availability of edible plants and animals through local foraging, trade, and the prevailing frequencies of diseases, droughts, and plagues within each population’s homeland (Nabhan 2004:1)”

Nabhan is the co-founder of the Renewing American’s Food Traditions (RAFT) Alliance, a program of Slow Food USA, and is the Director of Center of Sustainable Environment at the Southwest Center of the University of Arizona (SlowFoodUSA). He is working with other scientists such as the Suzanne Nelson for Native Seeds/SEARCH to distribute seeds of native Southwest crops such as maize and beans to local Native American farmers in the hot Southwest deserts (Eaton 2009).

Another scientist who studies the correlation between diet and indigenous diets is medical doctor Daphne Miller. She

writes extensively about the Tarahuma Native Americans (“Running Indians”) who live in the Copper Canyon network of Northern Mexico’s Sierra Madre mountains in her book The Jungle Effect: The Healthiest Diets from Around the World…. They subsist on native foods they have cultivated for centuries. Among the Tarahuma communities who abide by their traditional culture, subsistence and eat their traditional foods, there are virtually no instances of obesity, heart disease and diabetes. These same chronic diseases that plague neighboring Native American communities in northern Mexico, Arizona, and New Mexico who have adopted a Western diet of processed and fast food. For the details, recipes and sources of heritage foods check out Miller’s book.

So far, these heritage seeds are thriving in the desert heat while the conventional hybrid varieties have not according to journalist Sam Eaton in his segment titled “Sowing seeds that will take the heat”. Native seeds are once again producing good food in their native land. Sustainably.

Miller, Daphne
2008 The Jungle Effect: the healthiest diets from around the world–why they work and how to make them work for you, New York, NY: Harper Collins Publishers, pp. 370.