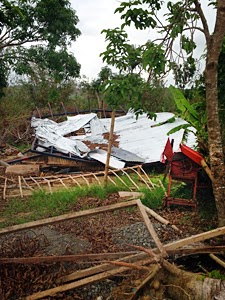 Amazing! Your grass roots support helped us to accomplish so much for Tsunami victims in Southern Thailand. During our short stay, we worked with local villagers, school children, the director of Ranong schools, the Vice-Governor of Ranong, local businessmen and relief workers.

The hospitality and kindness shared by those that opened doors to us, so we could directly aid to the poor victims was overwhelming. As you can well imagine the government/ international aid was working well for those that had a visible presence, but not for those that were under the radar. For those that were so poor they did not have the voice to speak up for aid.

There were people like Chris and Lenny that met us, measured our salt, then set up meetings for direction and of whom to help. Jada, who has been working with the poor for years, trying to train them in eco-tourism so they will not cut down the forest trees took us into the outlying villages that the waves had hit, and showed us the needs of the people so they could get their lives back.

After five days of meetings, riding in ancient Land Rovers to decimated villages, riding small and large “long boats” with extended props for propellers that extend 10 or more feet from the boat and talking with school teachers and fisherman, we found several projects that directly helped those who lost so much on December 26th.

The first project was to fund the building of a fish farm in an estuary. The estuary area is called Ban Muang Khong. It was there that the waves came over the tops of the mangrove forests destroying the houses and fish farm.

We purchased wood from Sarm Ram wood factory to make the supports that would rest on floats in a grid, nets attached underneath to hold the farm fish and shrimp. As part of this project, the villagers had a community meeting, where 35 families signed a pledge to rebuild the farm (which they had started when we left) and to operate it together.

They are also building a floating house on the edge of the farm with an eco-toilet we purchased that will not flush waste into the water. At this house, they hope to one day use as lodge guest house for tourists and help raise enough income for the village.

We also purchased wood to help rebuild a fishing boat. The wave had destroyed all the boats at Ao Keay beach, only a kilometer away from Bin Bang Bang. No material aid from non-profits or the government had come into this area and the men were standing around aimlessly, without a livelihood to sustain themselves or their families. So a meeting was held and it was decided that one of the boats could be rebuilt.

It was here, at this beach, that I looked into eyes which were like wells of sadness so dark no bottom could be seen. A man in his mid-fifties was trying to move furniture upstairs in his new, very small government house. He would lift an item, walk with it, then look at it as if he did not know he had anything in his hands, surprised and confused. My brother Stephen and Richard helped him move his furniture upstairs… in silence… the deadly silence of a home where the voices of women and children would no longer be heard. The wave took so many along this coast.

We also gave soccer and tennis balls to the local children who were having class outside while their school was being built because the old one was destroyed by the water as most structures were at Bin Bang Bang Beach. They were so happy they had us join in a game of tug of war. The laughter of so many children was like the true medicine of healing.

Our next project was to buy school books for 2nd and 3rd graders and to load two trucks with bottled water for the school children on Ko Sin Thai island. The waves had destroyed 78 homes and killed as many people at this very poor fishing community. We were the first relief workers to set foot on the island since the wave ripped through. It was here that we got stranded, unable to return to the mainland for a few hours, because the Tsunami changed the tides and raised the level of sediment around the island, making boat travel more limited.

On Ko Sin Thai the community water well used to be over 20 feet deep. The waves crashed over it. Now it’s only inches deep, supporting a community of roughly 1,000 people. Here, we gave more soccer and tennis balls (brought over from Ventura) to the children, as well as the water, books and drawing supplies we had purchased for them in Ranong, Thailand. The children were so happy, they could barely keep still with huge beaming smiles. They wrote us a big thank you note on 11/2′ by 3′ paper.

On Ko Sin Thai, we gave the saws, hammers, construction pencils, and squares to the villagers. The village chief took inventory, and had 5 other headmen sign a book, representing that the village agreed to use the tools as community property. They were amazed at how sharp the saws were. They told us that the tools would be used to help rebuild houses and boats.

It was on Ko Sin Thai, that we saw many people sleeping under cloth tarps on hills, too scared to sleep in their huts built on tall poles next to the beach. They feared another Tsunami would come. As we were shown the tarp camps, the villagers brought over a man with an amputee leg. He had lost his leg 10 years ago from a birth defect. My brother, Dr. Paul, was able to connect this man with the local hospital, a short hour ride away, but as if in another land and time. Also, it was here that friend architect, Richard, will help design the island a badly needed new school.

Finally, we were told by the vice-governor of Ranong, that there are 45 orphans from the Tsunami. All the children are very poor and living with relatives and family friends. 20 of the children had lost both parents. The vice-governor gave us a profile of each child telling us that they need scholarship aid for long term education.

So now we are working with our friend Chris in Ranong, who will be the liaison with the Ranong Department of Education (the same people that went with us on the boats to Sin Hai island) so that the scholarship money we raise in the U.S.A. will go directly to the educational facilities to aid the children. We hope to be able to post the children’s bio and pictures on a web site in the near future for any who have an interest in helping in this area.

I cannot thank each of you enough for all you have done to make this relief effort possible. You truly helped peoples lives with your kind support.

On behalf of all of us at KIRF- thank you.