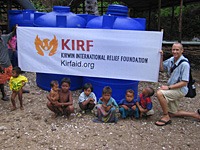 A local man who survived the tsunami and helped the relief effort in Thailand has returned to the states to launch a fund-raiser to assist areas devastated by the disaster that resulted in more than 150,000 deaths.

Ventura resident Mark Kirwin will return to Thailand on Jan. 30 after collecting donations at the 4 to 8 p.m. Saturday benefit at Genijitsu Dojo, 1645 Donlon St., Suite 101, Ventura. He hopes to reap donations of hammers, saws, and other non powered tools.

“I will take all the money raised and convert it into travelers checks and meet with people we worked with us during the relief effort,” said Kirwin, who then established the nonprofit Kirwin International Relief Fund upon his return to the United States. “We need to get them what they need.”

Kirwin, an attorney, along with his wife, Angela, and brother, Stephen, were halfway through their vacation when the 9.0 earthquake resulted in the devastating Dec. 26 tsunami.

“Everybody survived,” Kirwin said. “We weren’t at the beaches when the wave hit — thank God.”

Before the tsunami, Kirwin, his wife and brother spent time in Chaing Mai up north, visiting Buddhist Wats, praying near monks and walking around a stupa reflecting on the dharma of compassion and presence taught by Buddha. They wanted to travel to Ranong in the south on Christmas Day and made plans to catch the next boat to the islands on Dec. 26.

But they decided to stay another day in Ranong.

“That boat that left on the 26th was not heard from again,” Kirwin said. “If we had gone the next day, we would have been on the islands, Ko Phayam, on the 26th when the waves hit.”

The night of the disaster, a local Thai man interrupted the television news at the restaurant where they were and plugged in his video camera, showing footage of the remains of the coastal jungle, “wiped clean like the bottom of a river bed with only a few trees here and there left standing,” Kirwin recalled. “We all stood silently in shock at such devastation, it was real….It was hell.”

At the hospital, Angie comforted a man in a wheelchair, cut and bruised as if beaten repeatedly with a bat embedded with razor blades. His 3 1/2-month-old daughter was ripped out of his hands by the water. His other daughter was in a hospital 70 kilometers away, her condition was unknown. His wife lay in the hospital room above.

They spent several days helping in any way they could, comforting the afflicted and taking food and water to hospitals near Phuket and other areas. Working with the army, police, and local officials, they gathered supplies and as much food as possible.

When the army became involved, they returned home.

“Now we live on, but all the suffering continues,” Kirwin said. “The need is great, far greater than the American news leads us to believe.”

Images of suffering and devastation still in his mind, Kirwin has already booked and paid for his end-of-the-month flight to Thailand.

Saturday’s fundraiser will feature two folk/bluegrass bands, food, and beverages for a suggested donation of $20 or more.

“We’d be thankful for a dollar,” Kirwin said. “That can do a lot in Thailand.”

For more information or to make a donation, call Mark Kirwin at [phone number].